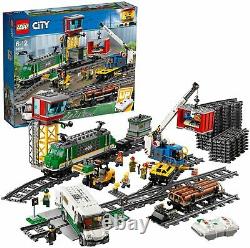 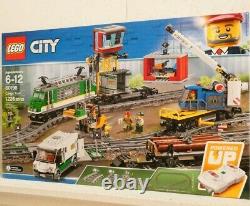 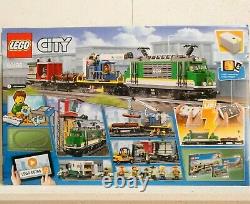 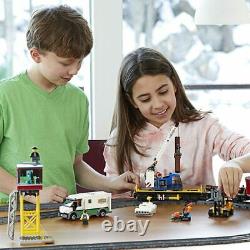 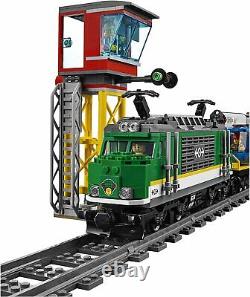 Includes 1226 LEGO pieces that assemble into a cargo train with 4 cars, a control center, an armored truck, a forklift, and rail tracks. For boys and girls age 6-12 who want to operate their own electronic locomotive.

Build your own runaway train story with a 10-speed Bluetooth remote control to operate the battery-powered railway as well as 6 mini-figures: 4 train workers, a security officer, and a crook. The LEGO City Cargo Train is compatible with all LEGO construction sets, giving kids the freedom of off-the-rails imagination when building the trains and tracks of their wildest dreams. Keep LEGO City supplied with the Cargo Train! Load the train cars and bring in what the city needs.

Create your own LEGO City Trains adventure! Plenty of room for open-ended play and imagination. Take command of the train, featuring a motorized engine with 10-speed Bluetooth remote control.

Dont let the crook get away with robbing the armored truck. Load logs with the crane!

Use the cranes extendable boom arm to get logs into the log car. The Control Center features signal lights to keep train traffic on the move. Use the forklift to place cargo containers inside.

The seller is "richiedavid" and is located in Richmond Hill, Ontario. This item can be shipped to United States, Canada.