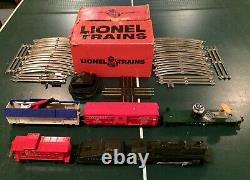 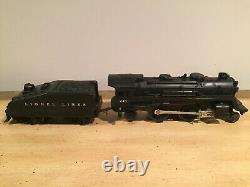 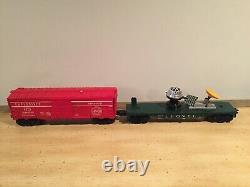 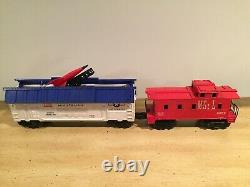 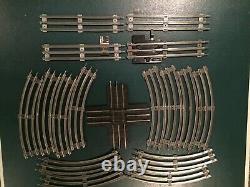 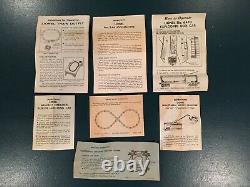 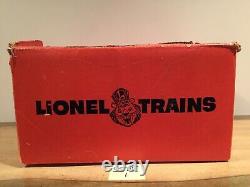 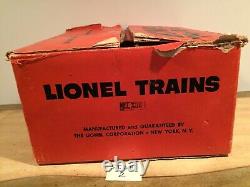 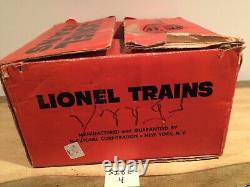 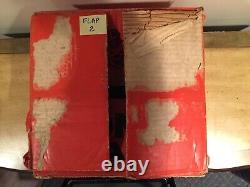 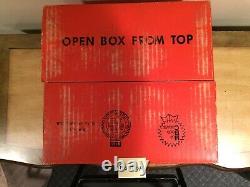 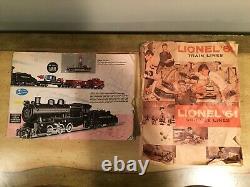 As the original owner, the train was extensively used so it does have the expected wear of a used set. I have tried to provide specific details as well as photos of most items to show their current condition.

The items in this set include. This is the original box for the set. It has a black number stamped on the side X694 which Lionel used to identify this set. The box is sturdy on all the sides and the bottom.

It measures 13 X 12 X 7. All flaps are intact and firmly attached although they do show considerable signs of wear. The sides are strong with writing on one side.

Overall a respectable box that remains strong and quite capable of protecting its contents. Since many of the cars in this set are operational Lionel provided operating instructions for each.

They are all in pretty good condition: Operating Instructions include (Transformer, Locomotive, Track Layouts), Satellite Launching Car, Minuteman Missile Launching Car, Target Box Car and, Transformer Type 1025. Included were two catalogs of additional Lionel products available for sale at that time. Not in great shape with pages missing, unattached or with heavy creasing and writing.

The Lionel Columbia Type 2-4-2-Locomotive No. This locomotive is equipped with Magnetraction, and a two position directional unit control lever located on the top of the boiler.

There is a headlight which doesnt appear to be working. This is Variation B VIII body and has been tested and runs in both forward and reverse. It appears in pretty good shape but probably needs some lubrication. This small tender was based on a Pennsylvania Railroad prototype. It has a crack on one side which was repaired years ago and it does dislodge from tracks often. It does run but will need some TLC repair for it to be fully operational. This Satellite Launching Car unlike the No. 3519 launching car is manually controlled. This satellite car is less common than the remote controlled version No. This car itself appears in pretty good shape but one flap of the satellite is broken and one of the car coupling devices is broken and needs repairs. I tested the launcher and it still works but will need a new or repaired satellite to work as expected (I have the broken flap). Minuteman Missile Launching Car No.

Based on an actual Air Force launching system. The car itself appears in pretty good shape.

One of the blue roof panels is missing the inside part that attaches it to the white car frame but it still holds in place without it. I tested the launcher and it still works but will need a new/repaired missile to work as two wings of the missile are broken. (I have the broken wings). This cars components are designed to separate when hit with a missile.

The body panels may be slightly warped but does fit together loosely and may separate with train motion. On one side panel the inside bottom part that attaches it to the cars chassis is missing but it still holds in place. I tested the spring mechanism for explosion and it still works. I also have the safety pin which is used to lock the mechanism to prevent explosion when not intended. A very nice looking car which is in pretty good shape.

LIONEL TRAINS TRANSFORMER TYPE 1025. Rated at 45 watts of power. It has a momentary push button control on the right terminal that activates the locomotive reversing mechanism. This has been tested and supports both forward and reverse.

It appears in good shape and fully operational. Constructed of Zinc-plated steel with double flanges for extra strength. These have been tested and they do work to form a simple circle or a small figure eight layout. These are not perfect as some tracks are missing attach pins or middle support parts but they seem to work. There are 17 pieces including; Straight Tracks Full (2). Intersection Track for Figure Eight Layout (1), Straight Track for Transformer attachment (1) and, Straight Decoupler Track (1). Not shown in photos but in good shape.

The seller is "larryr9927" and is located in Wantagh, New York. This item can be shipped to United States.